National Day of Dignity and Respect

Non-traditional allies ranging from the Minnesota Chamber of Commerce to the AFL-CIO gathered at the Basilica of St. Mary in Minneapolis for an interfaith prayer service and marched to the Hennepin County Government Center Plaza. The march was one of over 100 events scheduled nationwide to pressure members of Congress to pass reform that strengthens our economy, preserves the unity of families, and protects the rights of workers.

Pastors from various denominations prayed and called for our leaders to repair the breach created by racial, economic and partisan divides. Speakers asked the assembled marchers to come together through their belief in one God who calls us together as one community to call for citizenship.

Rev. Paul Erikson, Lutheran pastor and ISAIAH leader, serves Rep. John Kline’s second district and spoke on the urgent need for House members to pass reform in 2013: “We have a rare and unique opportunity to move beyond a shadow economy built on fear into a free and just society that releases the creative potential of all who live and work and study here. We need to stand together, walk together…the time is now.” Recent polling reported that 77 percent of voters in Rep. Kline’s district want to see action on immigration reform this year— including 66 percent of second district Republicans who support the Senate’s immigration legislation.

The Senate passed a historic immigration reform bill in June with bipartisan support; but now, the bill has stalled in the House of Representatives, despite overwhelming support from Americans to pass immigration reform this year.

“Civil war drove my family from our home in Liberia when I was 4 years old. Coming to this country at such a young age I’ve considered Minnesota to be my home,” said DREAMer Abena Abraham, “Today I remain on a legal, but temporary, status with no chance to ever become a permanent resident or citizen of the country I call home. How could I be sent back to a country I didn’t know anything about and, most importantly, how could I live away from my sister, who is a U.S. citizen?”

“Today Minnesotans from all walks of life put aside their differences to fix our broken immigration system,” said Immigrant Law Center of Minnesota Executive Director John Keller, “Now it is time for Congress to do the same and update a system that separates families and fails to meet the needs of our modern economy.”

More photos can be found here. 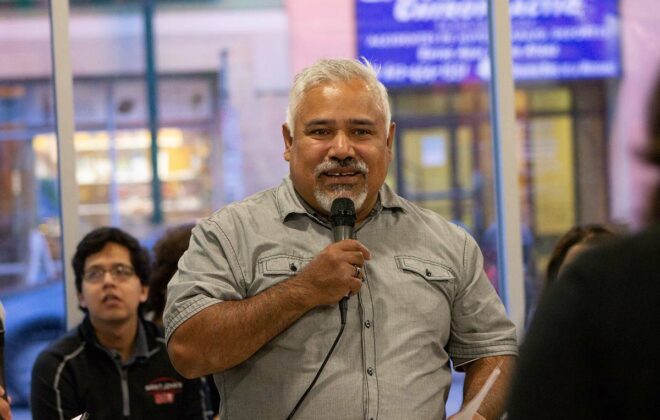