ISAIAH released the following statement about the just concluded session and its historic failure to pass legislation advancing racial and economic justice in Minnesota:

“This session presented a major opportunity to address the crisis of our state’s growing racial and economic inequity by putting families and communities first. Clergy and people of faith looked to our elected leaders to move beyond the status quo with courageous leadership to make our state one that reflects our highest values and aspirations.
Specifically, ISAIAH set moral, common sense policy priorities to:

‘We are very frustrated and can’t understand how GOP House leadership refused to do anything, even though all of our issues had wide bi-partisan and community support,’ said Martha Andrade, a member of Church of the Ascension in Minneapolis and an active leader in the drivers’ license campaign. ‘We were at the Capitol every week and did everything to bring our voices and stories. This leadership does not represent Minnesota families and does not acknowledge how important and basic drivers licenses are to immigrant families.’

ISAIAH, a faith-based movement in cities and towns across the state, led a grassroots organizing campaign that engaged thousands of people throughout the session. More than 1,000 people from 100 congregations went door-to-door at the Legislature and had over 100 face-to face visits with legislators. Throughout March and April, legislators were invited to faith summits in their districts and asked how they would use the remainder of the session to put families at the center of their decisions. Meetings were held in Moorhead, Northfield, St. Cloud, Willmar and suburban communities across the metro area.

Demetria Carter, a member of Greater Friendship Missionary Baptist Church in Minneapolis, became a critical voice for the push to restore the right to vote. As a frustrated faith and community leader, her reflection echoes many, ‘The House leadership not only rejected our issues; they rejected us. We did not fail this session; our legislative leadership did and we cannot continue having leaders so blind to the needs of our families for the right to vote.’

The House leadership pushed to eliminate MinnesotaCare but, thanks to the leadership of the Governor and the Senate, MinnesotaCare was saved. However, the program was cut by $65m, meaning vulnerable families will see an average of nearly $900 a year in increased costs and lowered healthcare benefits.

In addition, House leadership proposed a transportation plan that would have cut transit service 25% in five years. While this plan did not pass, the status quo package which passed in its place means that the transit system, which has seen a 14% increase in ridership over the past decade and inadequate funding, will continue to fall short for those who depend on public transit.

‘The people we love and the communities we have hopes and dreams for are, again, being told to wait for justice,’ said Rev. Paul Slack, ISAIAH President. ‘The decisions of our government say those who have been cut out of human concern are being cut out yet again. But as people of faith we will continue to organize; continue to be a prophetic witness to God’s call to justice and continue to build the power we need to move our state towards justice for our children, our families and our communities.’”

ISAIAH is an organization of clergy, congregations and people of faith across Minnesota working for racial and economic justice. ISAIAH is a member of the PICO National Network. 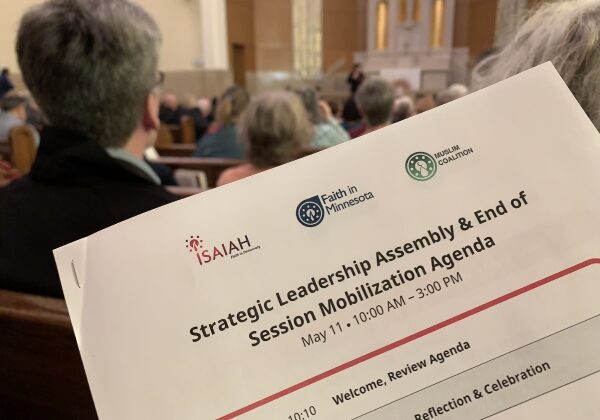 The Minnesota Legislature and the Power We Have Built